7 of The Best Cat Cafes Around The World

Hello, my name is Anne and I’m a cat cafe addict! Despite having two cats of my own, I can’t resist visiting at least one cat cafe in every city I visit. In fact, if I could live in a cat cafe I would. Maria has kindly allowed me to share seven of my favorite cat cafes around the world to share with you today.

I am living in Perth at the moment and was very happy to find a lovely cat cafe in the city. It opened in the Summer of 2016 and has been extremely popular ever since. Not only are the 11 resident felines very friendly, the cafe offers delicious sweet treats to nibble on while you relax with them.

It’s hard to go wrong with cafes in Paris – croissants, pain au chocolat and steaming hot coffee can be found on almost every street corner. Le Cafe Des Chats is no exception. The food is impeccable (we had brunch, croissants included!). The cats, like the French stereotype, are slightly aloof, but one excitable kitten quickly warmed to me and jumped into my arms.

Singapore is one of my favorite global cities. Famous for its sleek and modern architecture, The Company of Cats fits right in. This cafe could be straight out of the pages of an interior design magazine – shelving doubles as a cat climbing frame while litter boxes are hidden in a “cats only” back office. Cat-themed books and magazines are scattered on all surfaces, making it a good spot to linger for a few hours and escape from the city’s hustle and bustle.

There’s no shortage of hip cafes in South Korea’s capital. Animal cafes are popular too.  Besides the feline variety, Seoul is home to a sheep cafe, raccoon cafe and several dog cafes. During my trip, I visited Cat’s Attic, one of the cat cafes most popular with tourists.  It had a New York loft vibe and the cats are fittingly cool – you’ll have to bribe them with treats to catch their attention!

Although cat cafes originated in Taiwan, they’ve taken off in Japan more than anywhere else. Nekobukuro or “Cat’s House” in Japanese was the first cat cafe I visited back in 2009. Unlike the others in this list, it doesn’t serve food or beverages.  However, there’s certainly enough to keep guests entertained. The space is brightly colored and kitty hiding spots are all plentiful. If you can’t see one, chances are it’s sleeping above you in a ceiling nook!

Hidden away in a rather decrepit-looking building in Hong Kong is one of the cutest cat cafes I’ve been to. Not only is it home to some beautiful pedigree cats (including a Scottish Fold!), the food is kitty-themed too! I had a scoop of ice cream with two paw print cookies. Adorable and delicious.

Unlike the other cafes on this list, Peepee’s Katzencafe has only two resident cats. They’re tabby brothers called Pele and Caruso. The pair were adopted by the owner after being abandoned as kittens. It can be hard to catch a glimpse of them as they are bursting with energy. They spent most of their time chasing their toys and each other during our visit!

Guest blogger: Annie Cooper blogs at catobsessed.com. She lives in Australia with her husband and two very fluffy felines.  Apart from cats, Anne loves traveling, DIYing and all things cute. 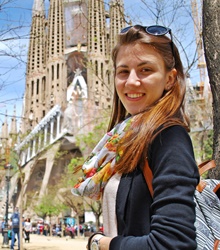